One of the system of German Nazi death camps localized on the German occupied Polish territory. Treblinka, Belzec, Chelmno, Sobibor and Majdanek were designed to mass exterminate 3,3 million of Polish Jews under the cryptonym "Aktion Reinhard".

The death camp in Treblinka was located in the northeastern region of the Generalgouvernement District. The camp was erected in a sparsely populated area near Malkinia Gorna, a junction on the Warsaw - Bialystok railway line, 4 km northwest of Treblinka village.

Construction was started in spring 1942 and the camp was ready to receive transports in June 22nd, 1942. SS-Obersturmführer Irmfried Ebert, an expert in euthanasia killing centre in Germany became the camp first commandant. Since August 1942 the command was taken by SS-Obersturmführer Franz Stangl, the former commander of the Sobibor death camp. Treblinka was run with the use of approximately 30 German SS-men and 120 assisting Ukrainian guards. In late 1942 Stangl ordered construction of fake rail station with ticket counters, clock and direction indicators, all this was situated close to the unloading platform. The purpose of this was to lull the arriving victims into believing that they had actually arrived at a transit camp. One of the main objectives of the camp command was to shorten the time needed to murder one arriving transport, in this way they could reach higher numbers of victims. In the initial phase, a section of twenty wagons containing 2,000-3,000 people could be liquidated within 3-4 hours. Later the Germans "gained experience" and reduced the duration of the killing process to an hour and a half. 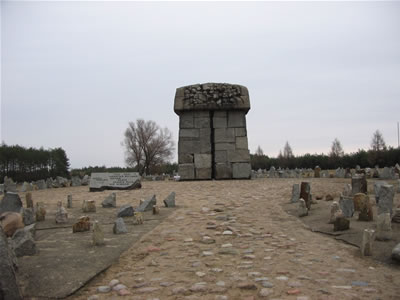 The Lazarett with red cross flag on the top was a barrack close to the unloading platform. In this place children, elderly or injured people were shot and burned in order not to slow down all the process of extermination in gas chambers.

In the reception area people were ordered to be undressed and leave all their belongings. Later they were run through narrow corridor made of two lines of barbed wire camouflaged with branches of trees, the so called “Tube”. Gas chambers were attached to motor producing exhaust fumes with lethal carbon monoxide. Close to the gas chambers were huge ditches for burying the corpses. From winter 1942/43 corpses were cremated by the Sonderkommando prisoners, instead of being buried. On this stage the elimination of material proof of crime was initiated.

On the 2nd of August 1943 a revolt was organized by 1000 prisoners kept on the site to operate the camp system. About 200 people managed to escape.

When Treblinka was liquidated in 1943, the camp area was ploughed over and trees were planted. The former camp area was turned into a farm for Ukrainian family who were to protect this place and give it a proper alibi.

Nowadays there is an impressive monument raised in the middle of Treblinka forest. One of its parts are 17.000 irregular granite stones out of which 216 have the names of different Jewish communities engraved.