One of the system of German Nazi death camps localized on the occupied Polish territory. Treblinka, Belzec, Chelmno, Sobibor and Majdanek were designed to mass exterminate 3,3 million of Polish Jews under the cryptonym "Aktion Reinhard".

The Belzec death camp was located in the southeastern part of the Lublin district, near Belzec, a small village on the Lublin - Lviv railway line. Such central localization in the former province of Galicia allowed to change this place into a site of mass murder for all Galician  Jewish communities from both present-day Polish and Ukrainian territories.

The camp construction was started as early as in November 1941, in December 1941 the first primitive, wooden gas chambers were built, they were upgraded to brick and provided with more efficient facilities in spring 1942.  The system was gaining experience in killing methods and Belzec was the first camp where solid gas chambers were built and tested. At the beginning they were operated with Zyklon B, later on - with exhaust fumes produced by Russian tank engine which proved to be effective enough and cheaper. 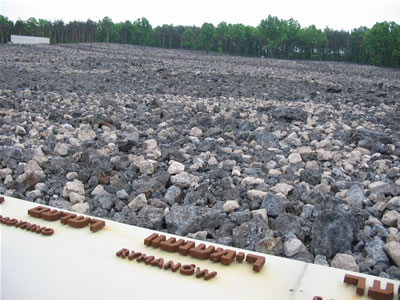 The camp was ruled brutally by commandant Christian Wirth and his German and Ukrainian SS Units. A small group of prisoners was kept temporarily on the camp grounds and forced to perform all work connected with killing new arriving victims and burning of their corpses.

The first mass transport arrived from Lublin in March 1942. From this moment transports from other places in Galicia followed. Lvov, Cracow, Stanislawow, Kolomyja, Rzeszow, Tarnow, Przemysl, Jaroslaw, Krosno, Zolkiew are only the largest Jewish communities murdered in Belzec. The camp was closed down in spring 1943, the ground was plough and  farm for Ukrainians was built on its territory in order to mask the mass graves filled with burnt corpses.

In 2002 there was a new monument and a museum opened on the former grounds of Belzec Death Camp. The monument was designed by Polish architects and constructed in cooperation with Yad Vashem and Holocaust Memorial Museum in Washington. The entire camp territory is covered with gray iron ore and there is a tunnel dug across the mount on which the Camp was located.