In late 1942 German Nazis decided to establish a concentration camp in the vicinity of Cracow. The new camp in Plaszow covered the area of two Jewish cemeteries located close to Abrahama and Jerozolimska streets. Both cemeteries were completely destroyed, monumental funeral hall was blown up and tombstones were used to pave the roads and to reinforce foundations of barracks. Plaszow Camp was constructed close to the international railway line which enabled in 1944 to change this place into a transitory camp for Hungarian Jews transported to gas chambers in Birkenau. Another important aspect of the camp localization was proximity of Krzemionki hills, where a quarry with murderous work regime was established. This helped to implement “Vernichtung durch Arbeit” – “Destruction through work” policy as the general plan for majority of concentration camp inmates. From February 1943 the Commander of Plaszow camp was SS-Untersturmfuhrer Amon Leopold Goeth, who was previously supervising death camps in Belzec, Sobibor and Treblinka.

Nowadays in the former Plaszow territory the following sites can be found: 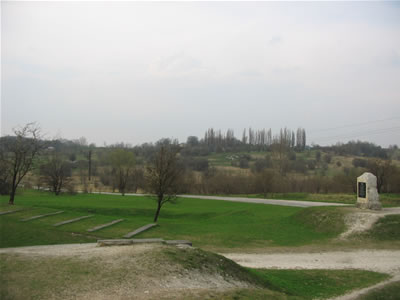