Hasidism as a religious and a spiritual movement emerged among Polish Jews in XVIII century and influenced many generations of its followers. It was created by Izrael ben Eliezer from Miedzyborz in Podole, also known as Baal Shem Tov. He lived from 1700 to 1760.

This was a time of slow  economic and social stagnation of Polish Kingdom, involved into many devastating military and political conflicts. A new spark was needed to uplift people and give them hope for the future. Religion might have been an answer. At first, mystic and messianic movements like Sabbataism of Frankism gained popularity offering some new strong leadership within Judaism. Soon, those paths were closed as their leaders went through conversion to Islam and Christianity.

In 1736 Baal Shem Tov started to travel through south-eastern borderland towns performing faith healing, exorcisms and convincing people to find relief in prayer. His charismatic personality  soon became main topic of local legends and rumors which helped him to gather many followers. This new movement was called Hasidism from the Hebrew Hasidim meaning "the pious".

The central position in this movement is taken by a tzaddik, the one who is becoming spiritual leader. He is often believed to have a direct contact with God proven by abilities to perform miracles. There is no single doctrine to identify Hasidism. Each tzaddik offers his own views and interpretations for its followers, which often leads to vibrant disputes. There are, however, some characteristics of this movement common to all groups. Here we can distinguish the use of ecstatic practices and unlimited enthusiasm during prayers, merging of the secular and religious worlds, high level of orthodoxy, following the tzaddik, Kabalah based  belief in the existence of nitzotzot (holy sparks)  which are released from the shell of evil by piety and fierce prayer. After being released they can come back to their divine source. 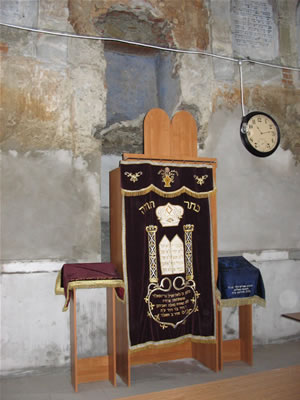 Tzaddikim and their courts, made out of pious followers, were usually settling down in small towns and villages, soon changing them into shtetls. The house of a tzaddik was a place of constant pilgrimages of Jewish people looking for advice, prayer and relief. Some tzaddik courts like Bobowa or Radomsko  became well known all over Poland and even beyond its borders. The ecstatic prayers followed with aloud singing, gave birth to unique Jewish  klezmer music. The dignity of a tzaddik was often inherited by his sons or family. Dynasties were conducive to permanence and also enable the movement to develop. Hasids in order to have direct contact with Torah were establishing many shtibleh - daily rooms of prayer.

Hasidism as a movement was associated almost exclusively with the lands of the Commonwealth of Poland. In XIX century they went into strong conflict with Jews following the Western European Haskalah and Zionism.

Nowadays Hasidic communities are still strong mainly in the USA and Israel. They are still organized around tzaddik, usually the representative of a next generation of pre war Polish tzaddiks. Many of those groups are visiting Poland during pilgrimages to the sacred places where the first tzaddiks and outstanding Jewish scholars were buried.