It started with a sprint and goes into a marathon relay race.

What have we learned after a month of the Russian war in Ukraine?  Is there something that we didn’t know before?

On February 24th, 2022 everybody seemed to be in the starting blocks.  There was no space for the intricacies of a starter pistol.  At 05:00 AM Russia gave the signal to run with ballistic missiles fired at Ukrainian airports and heavy artillery shelling at the borders.

Everybody was ready for a sprint which gradually went into a hurdle race then a long marathon becoming now a relay marathon run.

The Polish sprint to the border to assist and support the first waves of refugees caused roads in south-eastern Poland to be displayed in purple on Google maps. Some cars returned empty as the border procedures were slow at first, causing kilometers-long lines of mothers with children waiting in hostile February weather conditions. I remember Tanya from Kyiv who stood for 25 hours tormenting herself with the blame of abandoning the country and exposing her children to the unknown length of the line in front. Or even more unknown on the other side of the border.  Soon the volunteer tents were set up along the line of people to provide food and shelter. Victoria—who fled the bombing  of the Kharkiv block of flats— when reminded by a young Polish volunteer that smoking kills, instantly fired back that, “bombs kill more.” There was laughter.

COVID-19 restrictions gave way in the light of the humanitarian crisis unfolding. The very same people who only a few months earlier were convinced to consider which family member shall be invited to the Christmas table were now taking total strangers into their cars and homes. The 74 year- old Alksiey from Kyiv, a man who was one of the Chernobyl  liquidators asked me a question after 4 hours of driving. “And how about COVID in Poland?” We just gave each other a look and burst into laughter.

The last month was the management of chaos in an attempt to help and learn how to help better.

It has been a busy time when many Poles and people from all over Europe suspended their previous lives to give first-response following an instinct of providing humanitarian aid. To be frank, I think that we provide help also for very selfish and private reasons.  The first two days of sitting at home and vehemently scrolling the news were driving me to the point of madness. Going out there and providing help was for me a good way to protect my sanity in the shattered reality around. 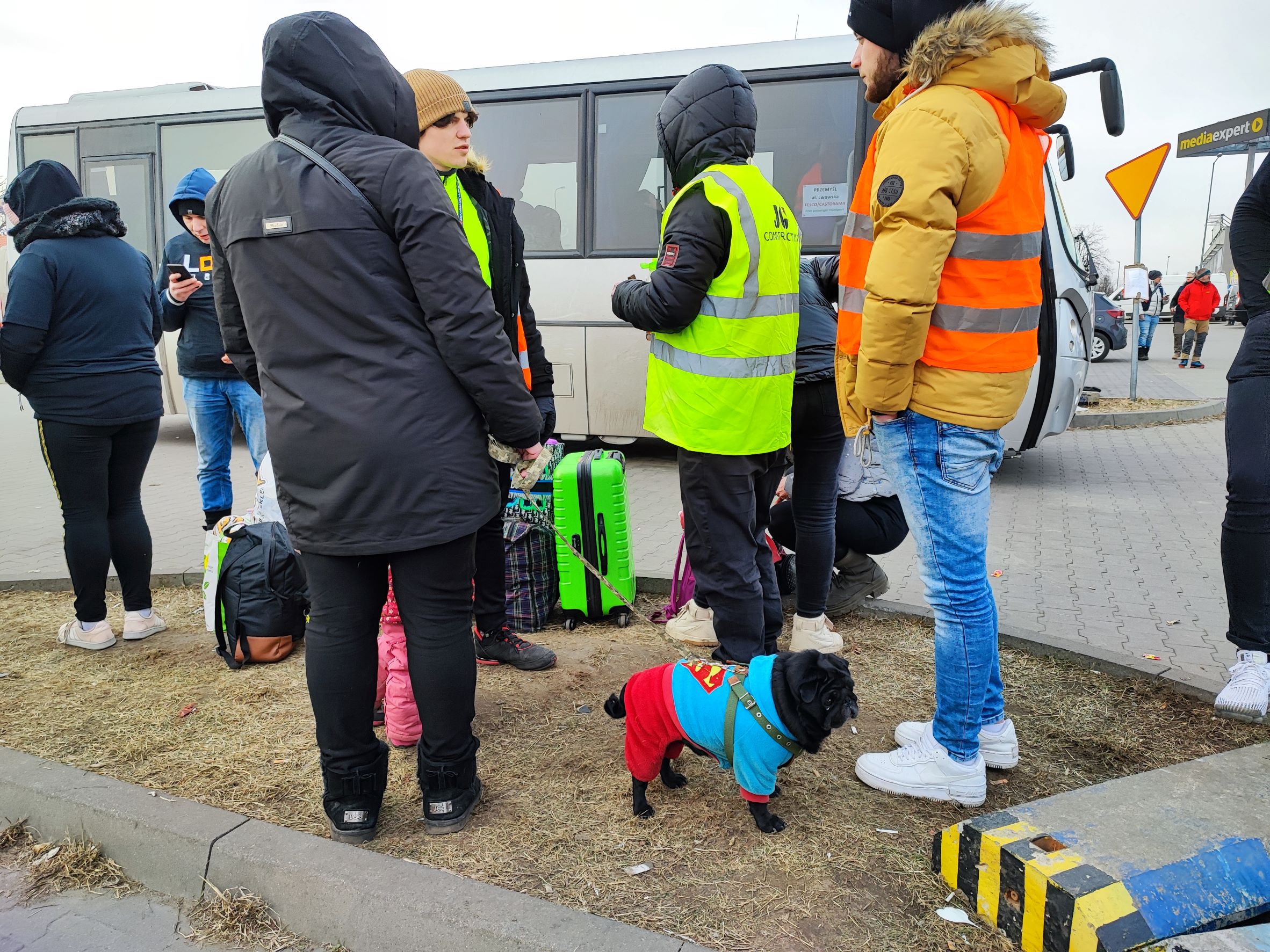 The Refugees at crossroads.

Often just after crossing the border being haunted and traumatized by imagery and sounds of war they need to make a life-changing decision about what next.  Shall we stay or shall we go? Where to stay and how to go? At this very moment in most cases, they have no idea that boarding a bus from a charity organization from Denmark or Germany instead of waiting at the overcrowded reception center has future implications for them and their children. Many of them are at their weakest, yet the reality is demanding to take sharp and informed decisions about their future.

There is always hope that the war will be short and they shall stay close to return and rebuild. This is mixed with a sense of guilt for abandoning the country in need. The realization that in the future Ukraine needs its civilians alive sinks in very slowly.   There is always extreme tiredness, lack of sleep, no luggage, lack of documents, and in most cases crossing the Ukrainian border for the very first time in their lives when their loved ones are still on the other side.

Can you take an informed decision about your future in such a moment of distress?

The moment when you are gasping for a minute of rest to collect thoughts.

Last Tuesday, March 29th  marked over a month into the war and it was an intensive day of travel logistics for me. After 20 years of working in inbound tourism, I have started to do lots of outbound travel and living arrangements for our Ukrainian sisters and brothers. Transportation, safe home, and rest first. Discussion about alternatives next. Nina runs from Kyiv with her mother and 6 year-old bedridden son. Lydia and Igor run from Kharkiv after 3 weeks of heavy Russian shelling.    The amazing chain of people builds a social media life rope to take Lydia and her son to Portugal and Nina with her family to Greece. Tuesday, March 29th was the day of travel.

The people of first contact are the volunteers at the border and drivers who, after February 24, often suspended their lives to show up in the first row of help. They open their hearts and extend their hands to prevent the fall into the unknown or at least to make this transition smooth and painless. Some of them enter Ukraine; some stay on the Polish side

Then comes the little army of those who open their homes and apartments to host and give shelter. Often the less they have the more they share. Often they instantly react to despairing  FB ads about apartments needed now for a family of 6. Despite midnight arrival, they are ready with a smile, mattresses, and a couple of words in a bit of rusted school Russian. With an apology in their eyes that this is the best, they can give and add some softness to Russian words so that they don’t sound that Russian.

I have met only some of them but adored every minute of our task-oriented conversations.

The first days have shown the moral strength of some institutions and devotion to their founding values. It is not always easy to put those values into action. But it was a matter of one phone call at any time of day or night to hear the very needed,  “yes we have space”  at MDSM Oświęcim, Centrum Dialogu i Modlitwy in Oświęcim, or the refugee center in Cracow run by  Salam Lab, Zustricz Foundation,  JCC Cracow and UAinKrakow.pl.

I have been struggling with social media for years promising myself to quit under the next and next algorithm change towards 100 % commercialization and sale of private life content. The last month showed the better face of social media as a logistic tool. A tool that is the first response instinct replaced the state red tape burdened structures. Thousands of fixers started groups like Help for Ukraine or Transport from the Border and combed the forums daily looking for matches. They keep the market of needs and help offers in balance. Mother with a child, driver, number of seats,  translator, Polish SIM card, apartment, humanitarian aid,  clothing, and work became the magic spell words for people making the matches. Yes, you can help very effectively from behind your computer screen and every next match meant a Ukrainian mother with a child having a place to stay overnight or over a month. It became an addictive game on the screen but with real-life results.   It sometimes meant as little as a driver who spend 12 hours from the Korczowa PL-UA border to Berlin returning the next day to hand a birthday gift to 9 years old Alisa from Kharkiv. Alisa was his passenger the day and night before.

At times it meant as much as Viber, FB, What’ Up and Messenger coordinated travel for Lydia and Igor from Russian shelled Saltievka district of Kharkiv into a warm Polish home in  Zelkow. The same social media channels with fixers were used two weeks later to take them from Zelkow to Lisboa. I would never expect that one can use social media to make people cross the formal borders with just Ukrainian certificates of birth. The Portuguese Embassy in Warsaw was responsive through Viber and produced travel papers instantly as the Portuguese charity chain run by Diogo Monteiro from Warsaw covered the costs and logistics of the flight.

Nina and Lydia with their families landed in Greece and Portugal last Tuesday and I have made a promise to bring them back into free Ukraine once they and their country are ready to meet again.

Social media works and as every piece of technology becomes its worst or its best in our hands. I have seen social media at its best over the last month or rather I have seen thousands of often anonymous fixers using social media responsively and responsibly to give hope or save lives.

Special thanks to “keyboard warriors” I have met, although I know that they are engaged in every other form of help as well.

Everybody was ready for a sprint which gradually went into a hurdle race then a long marathon becoming now a relay marathon run.

Running has never been my sport and I have major issues with crowds but the last month was a pleasure and honor to participate and observe this mass relay marathon run towards unity and help.